“You remember that away game against the Dolly Rockits?” one of our Rockers contacts asks. How can we ever forget it, taking place as it did in a greenhouse in the countryside on the hottest day of the year. “Well, the Lille game was even hotter.” Jeebers. The Dollies game was so hot it caused us to hallucinate profusely (see the report on this site from last July for the evidence). Thank goodness we didn’t manage to make it over to Lille then, or this report would likely be a long row of gibbering noises occasionally punctuated by “how much water can you get out of a goldfish” and “there’s a BBQ in my head and it’s been left unattended, aaargh!” We still want to cover the game though, so we’ll be relying on the rather less frazzled recollections of a few Rockers to piece together this report.
First things first, this was not an A-team (All-Stars) game. Although a handful of first teamers took part, there were also three players making their Rockers debuts – Banger and Obliviator with a few mixed games behind them, Irish Mist playing her first ever match. Second things second, Brighton only fielded ten players. Even though our maths is pretty bad, dividing that by five (the number of players in each jam) leaves us pretty sure the Rockers had to stick with two regimented line-ups of five, swapping over each jam. “The presence of some less experienced players meant we couldn’t really adjust our walls tactically even within those line-ups,” we’re told, “as there are certain places on the track – eg on the inside line – where you really need to have someone more experienced.”

It was a long day for the Rockers. “We set off around 8.30am,” says another player, “so we’d been on the go for twelve hours before the game even started!” The pre-game preparations took a slightly surreal turn when a taxi driver deposited half the Brighton team at a field hockey venue – where Swansea were playing a French side in the women’s Euro cup – rather than the roller hockey venue where opponents Switchblade play. They eventually make it across to the correct venue, an indoor skate park with a Sport Court style floor. “Sticky for wheels and slippy for toe-stops,” we’re told, “meaning we had to work much harder – no easy task in the heat – and it was tricky to stay in bounds when stopping.”
One Rockers line-up consisted of Mistress (marking her return to open door competitive action after a year off through injury) and Enyo Face alternating in the star, Anti-Gravetty taking a lot of the pivot duties, Maidenderry and Irish Mist. The other had Ultrafoxx and Emma the Condemner jamming, Racey in the stripe, Banger (captain) and Obliviator. Their opponents were the first league to set up in Lille, back in 2010 – the same year the Rockers started – and although another league in the city currently ranks slightly higher, they provided tougher opposition than Brighton were perhaps expecting. “We should know not to underestimate teams, after our loss to Bristol in last year’s UKRDA tournament. Switchblade were good strong players, a higher level than we perhaps expected based on YouTube footage.” 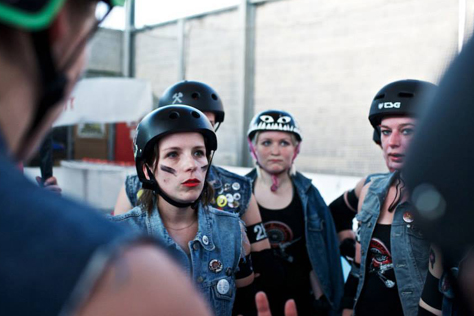 With The Mighty Mighty Bash as mighty mighty bench coach and Maudeo Fondeo on line-ups (a partially redundant role in the circumstances), Brighton get off to an early lead. At one point they’re 60 points up. Switchblade have a full fourteen to chose from, but tend to alternate between two pack line-ups, one of which is more muscular than the other and proves tougher going for the Sussex jammers. Emma and Foxx are up against the more physical pack in the first half, with Mistress and Enyo facing them in the second period. Both sides are penalty heavy, and as the game progresses, the numerically disadvantaged Rockers squad start to tire faster than their opponents. It’s particular tough going for the jammers, of course, and star passes are more frequent in the latter stages of the game.
“I just couldn’t carry on in the star in one second half jam,” one player tells us, “as I was spent in the heat. Unfortunately my mouth was so dry that I couldn’t ask our pivot if she’d take the star from me. I tried to say it on several passes, but no words came out, so I had to carry on jamming. Aaagh!” In another case a Brighton pivot sees her jammer is in trouble and desperately asks for the star, but again heat and pace prove barriers to conversation. Emma jams the last six or seven outings for one Rockers line-up as Foxx retires into the (relative) sanctity of the pack. Brighton had gone into half time a couple of dozen points ahead, but their lead is overhauled in the second period, and the bustling Switchblade side take the game 171-136.

Hell’s Pins and Paf Pastèque pick up the best jammer and blocker awards respectively for the Lille team, with Enyo Face and Racey being Brighton’s recipients. With the game starting so late, the after party doesn’t get going until 11. When the bar hosting it closes a couple of hours later, the drinking and dancing continues at a NSO’s house until the sun rises. “We could learn a lot about hospitality from Switchblade,” says one Rocker. Whilst many UK leagues leave their opponents to fend for themselves prior to the game and post after party, the Lille league fed Brighton twice, took them along to the house party… some even met up with the Rockers the next day to show them the sights, including France’s largest market (which many were too hungover to appreciate) and a plethora of wine bars. “They kept buying us all rounds too. They were so nice!”
“Switchblade were thrilled to take the win and it was good to be able to celebrate that with them,” another player tells us. Brighton also sold a huge amount of merch at the game, a testament perhaps to the standing UK derby has on the continent – that and the Rockers’ awesomeness, of course. To some extent, a large part of the game’s raison d’etre from a Sussex perspective was the blooding of players, and the debutants all fared well in trying circumstances. The most debutanty of all, Irish Mist, earned a lot of praise for going the entire game (playing in virtually every other jam, remember) without picking up a single penalty. Extra impressive given that a number of far more experienced players, mentioning neither Racey nor Emma’s names, came very close to fouling out.

The journey across on two minibuses via the Tunnel went relatively smoothly – the field hockey taxi diversion and a mild amount of getting lost excepted – but the return journey involves smuggling one player back into the country (she’d left her passport in the apartments the Rockers stayed in). This mixed level side, or other variants like it, are hoping to play a few more games this year and beyond, both home and away; hopefully with more than ten players, though. Despite the defeat, the Sussex side had a very enjoyable weekend away and would like to pass on thanks to all the Switchbladers, particularly GabriHell and ref Nellie R’Oleson, for their hospitality.
The game in Lille may not have been a walk in the park, but a skate in the park is next on the agenda for Brighton. The Rockers will be at Active Sussex in Preston Park tomorrow (Saturday 21st June) so pop down and say hi. They’re also offering a free derby taster session at the King Alfred on Monday (23rd) 8.30-9.30pm. E-mail info@brightonrockers.com for more information. Switchblade, meanwhile, are pitting their B-team against Valenciennes in Lille this Sunday. As for the Brighton Rockers first team All-Stars, they’re back in action on Saturday 26th July with a home match against near neighbours Croydon Roller Derby at the Dolphin in Haywards Heath. Tickets are on sale now – see below for links.

[Photos by Mathieu Drouet via Switchblade RollerGrrrls. Thanks to the Brighton players who spoke to us for this report.]