Did you check out Part One of our Review of 2016 last week? Click here if not for the full story of January to June in Rockersland. We pick things up in Part Two (slightly delayed due to a bout of flu in BRATS HQ) in the seaside sunshine… The month of JULY saw one of the longest awaited match-ups in British derby. Brighton and Eastbourne have both had roller derby leagues for several years. Although the two have scrimmed with and against each other many times behind closed doors, there has never been a public game between them. All that changes on the Saturday of Eastbourne Extreme 2016 as the Brighton B-team Rockerbillies face off against Eastbourne Roller Derby’s Bourne Bombshells in the lunchtime sunshine on Ebo seafront.

These two sides narrowly missed out on meeting in the playoffs at last year’s Extreme tournament and both are much changed twelve months on. Brighton are giving a few of their 2016 Fresh Meat intake a first taste of action in front of a crowd, whilst Ebo (who are having a quiet year in terms of open door games) also have a number of new skaters in their ranks. The Rockerbillies have the better of the opening exchanges, with the likes of Mighty Mouse, Lab Wrath and Hippy Hippy Skate jamming them into a 35-14 lead. Despite the scoreline, which soon extends to 76-24, the ‘shells are getting as many lead jammer statuses as Brighton here. Track cut penalties are in abundance, however – as they would be on an outdoor surface with no perimeter wire to warn you – and these seem to be hitting the purple jammers harder.

Lily Malicious donning the Eastbourne star for the first time today. Hates jamming apparently, but her haul of fourteen marks the hosts’ best jam so far. Scoreless outings for Crash, Von Stackit and Amazing Graze follow as the Rockerbillies take a 122-48 lead into the interval. Polly Dartin and Speedy Gonzalex giving good defence for Brighton in the second half, with Smash’Er Fierce and The Philosofear both as hard-hitting as ever for Bombshells. Cruelty Spree fouling out for the ‘billies now. “You only get seven penalties in roller derby,” intones Tenacious P on the mic. “So make them good ones,” adds Mother Mercy. Smash’Er sending the entire pack (Brighton and Eastbourne) flying now. A number of high scoring jams for the impressive Mighty Mouse have made the difference here, as ‘billies bench coach Mistress celebrates a 207-142 win.

The Rockers keep things chill over the summer, with their only public outing on skates in AUGUST being in the Brighton Pride parade. Early SEPTEMBER brings a double header in Haywards Heath against two challenge teams. First up the A-team AllStars face Team No Fuss. Captain Gin Atomic gives the hosts an early lead, before a great turn in the No Fuss star from Beat’her Parker (dancing along the outside line on her toe-stops) puts the visitors 25-16 up as Brighton call a team time out. Kapow is having a really good game today, battling hard to put more points on the board for the Rockers, but the No Fuss defence – particularly Wheel Deal and Liannarchy – are super resilient. Game tied at 40-40. Beat’her off for a while being treated for an injury. LRG’s O’Malley now donning the star every other jam for No Fuss and hitting Brighton hard, but some great starhead outings for Velvet Bottom, Gin and Shambolic round off the half with Brighton 93-50 up.

Half time sees a woman angrily berating a group of fans with a ‘Kick Her In The Face’ banner. “That’s not in the spirit of the sport,” she rails. Er, apart from being the Rockers team’s pre-game chant. Beat’her is back in action in the second half. She and Liannarchy are putting in good stints in the No Fuss star, but Brighton are racking up roughly double the visitors’ points haul here. Super tough blocking from Finn McCruel as Kapow hits another nineteen without reply. Further Kapower jams follow. Janey calls a team time out with one second left on the clock. Gin spins in a few more passes in the bonus jam as the AllStars roll out 240-113 winners. Curiously there are no victory laps and slaps, with Bomb S’Quadder Chasin’ Status the only member of the crowd to line up by the track tape. Maybe the ethos of ‘No Fuss’ is contagious?

Rockerbillies v Team Dragon now, a final game for ‘billies co-captain Van Hayley before her transfer to Bristol Roller Derby. The Rockers B-team are low on numbers here, so five Bourne Bombshells have joined their ranks. Several No Fuss skaters are back on track in Dragon colours. Things start out close, but a little messy. Dragons’ Tinkahell is expelled from the game for entering the penalty box at a dangerous speed. Janarchy, Amazing Graze and Hippy (the ‘billies best jammer so far) edging Brighton into a 30 point lead, but Dragon pull it back to 95-82 at the half time whistle. The Rockerbillies start the second half with their jammer in the box and Streets Of Rage takes advantage to make it a three-point game. Solid jamming from Lab, Hippy and Speedy, together with tough blocking from Van Hayley and Dolores Diablo, sees the hosts take a 142-100 lead with half a half left. Velocity Kendal, Streets and Rumpleteaser battling hard for Dragons, but the only question now is whether Brighton will make 200 before the final whistle. A power jam from Hippy sees them do just that with the final pass of the game: 200-118.

The B-team sit out OCTOBER, whilst the A-team AllStars head off on two road trips, beginning with the Rockers’ first meeting with Welsh opposition as they take on the Tiger Bay B-team. We like Cardiff, mostly as it just seems to be one giant pub. The Wetherspoons by our hotel has THIRTY real ales on at £1.99 a pint. With Tiny Rebel, Brewdog and Waen Brewery bars in the same street, we leave this road only twice over the weekend, both times for visits to warehouses in the docklands area. The Doctor Who Experience is Sunday’s destination, whilst Saturday’s is Cardiff Central Youth Club. This is Tiger Bay’s first game in this cavernous venue, but a sudden threat of closure (Brains brewery wants to relocate to the site) means it could also be one of the last, gadnammit.

Tiger Bay’s A-team were ranked #1 in the UK Roller Derby Association on several occasions in the past few years, so their B-team is always going to be a tough proposition. The game starts off surprisingly clean, with no penalties (we think) for anyone in the first four jams. No sooner have we written this in our notebook than Cake Or Death becomes the first of a whole sequence of Rockers blockers taking a seat as the hosts rack up a 35-5 lead. Two five point passes for Gin makes things look more presentable for Brighton, but the likes of Hello Reeshi, Boba Fettish and Wild jammerise the hosts into a 102-62 half time advantage. The Rockers have been getting a reasonable number of bites of the lead jammer cherry – with Sham a particularly effective starhead today – but the Welsh packs are super hench.

Half time sees a demonstration of junior derby (Tiger Bay are probably the UK’s leading exponents of under-18s derby) as we enjoy the cheapest bar table we’ve ever encountered – £2 for a can of Guinness is practically offie prices! Those blocker penalties we mentioned come home to roost as Hairy Fairy – usually one of Brighton’s cleanest defenders – fouls out in the first jam of the second period. The announcer gets so excited by this that he blows up the PA; the remainder of the game will have a background of just music. Mighty Mouse does well in the Rockers star as the bar table runs out of Guinness and presents us with a Hobson’s Choice of shandy or Carling. The Sussex starheads are not getting much chance to take advantage of LJ status here, with the Welsh jammer almost always immediately at their back. Tiger Bay B-Bombs take it 227-147 and the Rockers retire to the thirty ales Wetherspoons. 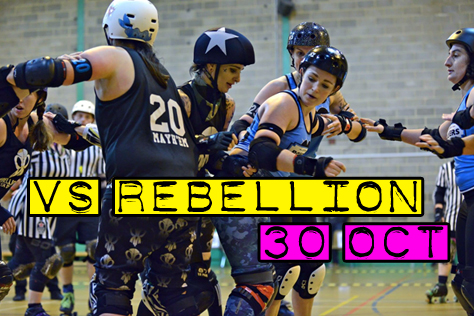 A mere two weeks (and one day) later and the AllStars are back on the road. This time the destination is Houghton Regis, a cluster of estates outside Luton that takes longer to get to on public transport than Cardiff – waaah! Rebellion Roller Derby are the hosts and they get off to a flying start with Boris and Dew Drop Her hitting Brighton for 17 without reply. The former is Rebellion’s biggest jamming threat, whilst Mayh’Em throws down tough blocking as the likes of Skate Bush and Sham struggle to break through. 48-11. Gin and Juno running master classes in apex jumps for their respective sides. Hench hitting Bush so hard she goes back in time. Never known a half with this many official time outs. It’s a squeaky close 145-122 to the hosts at the break.

Rebellion’s bar is even cheaper than Tiger Bay’s. In that it’s free. In that there isn’t one. “A venue with no alcohol means a quiet crowd,” one Rocker solemnly predicted, but the atmosphere’s actually pretty good. Superstar performance in the star from Sham at the start of the second and suddenly it’s 151-141. Rebellion keeping ahead through the period but only by a power jam’s distance (fifteen-ish). Brighton 217-235 down with 1’15” left as Gin lines up against Boris (who is starclad every other jam now) for the umpteenth time. Apex jump. Track cut. Track cut. Apex jump. Track cut. Super tough Brighton pack. Suddenly it’s 235-226. Is there time for two passes from Gin before the jam clock ticks out? There is. Takes it 236-235 in the final second as the Rockers go wild….

…only to go somewhat less wild ten seconds later as the two points Rebellion’s jammer banked before her final penalty box visit hit the scoreboard. Brighton haven’t won by a point, they’ve LOST by a point: 236-237. Ah poo. Still, an epic game, and the day’s second match sees the surprise re-appearance of ex-Brighton and Eastbourne skater Swann, here debuting for her new team, the Kent-based Apex Predators, after a long break from derby. Speaking of taking a break, we’ll pause our Review of 2016 there. At the end of October? Are we crazy? Yes, but so are the Brighton Rockers, and their November and December were so packed full of derby (eight games in a four week period!) that they demand an instalment of their own. See you soon for Part Three of our round-up…