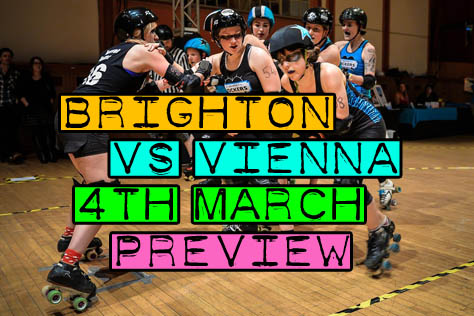 The mighty Brighton Rockers have their first home event of 2017 this Saturday 4th March at the Dolphin in Haywards Heath. Both the A-team and B-team will be action against their equivalents from Vienna Roller Derby. Tickets priced £10 adults, £8 students and free for Under 12s are available from the link at the bottom of this piece or on the door. There’s also a special online only deal of four adult tickets for the price of three, so round up some chums for a bargain price. Doors are at 2pm. If things follow the usual format of Rockers double headers we expect the A-team game first at around 2.30, followed by the B-team match at 4.30-ish.

If you’re one of the many who caught the Rockers in action for the first time at December’s exhibition game at the Corn Exchange, the venue in Haywards Heath is actually pretty easy to get to from Brighton. Drivers should point their Sat Navs at RH16 1LY – there’s parking at the leisure centre. A train from Brighton to Haywards Heath takes around fifteen minutes (£4.55 return with railcard) and the leisure centre is seven minutes walk west of the station. There’s a reasonable pub by the station (Burrell Arms) and a big Sainsbury’s on the way to the venue. There are ATMs at the station and Sainsbury’s but none at the leisure centre itself, so bring some cash for the bar and merch stands. Rail users from west of Brighton should note that the trainline between Brighton and Littlehampton is completely closed on Saturday, so allow a little extra time for a rail replacement bus to Brighton.

[Skip this paragraph if you don’t like to know predictions ahead of a game.] Brighton’s A-team didn’t have the best of starts to the year, going down to three heavy defeats in a tournament in Normandy at the tail-end of January. That has hit their ranking and is reflected in the Flattrackstats predictions. Vienna are rated 82nd in Europe on 565.5 points, whilst the Rockers place 113th on 536.2. The visitors are given 66% chance of victory, with an expected differential of 46:37 working out at something like a 184-148 away win. Vienna’s B-team place 252nd (472.4 pts) with the Rockerbillies 317th (449.5). The Vienna Beasts are given a 62% victory chance here, with an expected differential of 7:6 equating to something like a 175-150 win for Vienna B. It’s worth noting that Brighton are fielding full size squads (fourteen players) in both games, and we’re expecting them to fare far better than these predictions suggest.

This will be both leagues’ first open door games under the new WFTDA ruleset. The world governing body introduced no fewer than thirty rule changes two weeks ago, the biggest changes to the rules in around three years. See if you can spot what’s different on track. Or better still, pick up your free copy of our magazine ‘Turn Left’ on the door. Inside Rockers Head Ref LaserHammer talks us through the rules changes, whilst Finn McCruel and Shambolic look back on the last three months of games. The mag has full previews of not just Saturday’s games v the Austrian capital, but also the away trip to Portsmouth later in the month (Sat 25th) and much more. Enough blatant plugs for our tawdry zine, let’s hear from both leagues involved this Saturday…

“We’re going into the A-team game with a full roster and in theory, if we can do our magic, we can get all of our ranking back. We dropped down a lot because of results in Caen, but a good win over Vienna will put us back up there. So yeah, I’m hoping we beat them by a hundred points to get our old ranking back!”
SHAMBOLIC, BRIGHTON ROCKERS

“For the sake of harmony I would hope that both leagues win one game each. But as bench coach I really hope that Vienna Roller Derby wins both games. I leave the predicting to Flattrackstats and whatever they say is not written in stone either. It’s roller derby, so anything can happen!”
VENOM IN FURS, VIENNA ROLLER DERBY