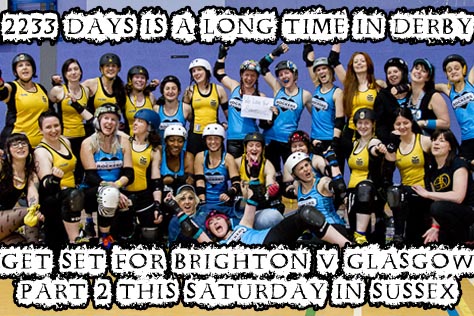 This Saturday (1st June) Haywards Heath plays host to what is to date the most long-awaited rematch in Brighton Rockers history. It was way back on the 20th April 2013 that the Rockers took on Glasgow Roller Derby up in Scotland. That’s a gap between home and away A-team open door games of a whopping 2,233 days. By way of contrast, the next longest wait for a hosting rematch was the 1,358 days between away (March 2012) and home (Nov 2015) games against Belgium’s GO-GO Gent. This is followed by 882 days v Rockcity Rollers who Brighton met in Eindhoven a few weeks ago. Vienna comes next at 588 days, with Brighton’s other home and away A-team opponents, Cambridge, Portsmouth and Dublin, all seeing gaps of less than a year.

So this Saturday’s clash is a big deal, but it’s probably best not to ask the 2013 Brighton players still skating for the Rockers for their thoughts on that previous game. It was, you see, the first open door defeat in Brighton’s history and the loss was a big one: Glasgow 310 to Brighton’s 111. Will Saturday provide those players with an opportunity to avenge that result? [SKIP THIS PARAGRAPH IF YOU DON’T LIKE READING PREDICTIONS BEFORE A GAME] Flattrackstats seems to think so. They rank Brighton 253rd in WFTDA with Glasgow 281st. The Rockers are given 74% chance of victory with a predicted differential of 45:34 suggesting something like a 180-136 home win. It should be pointed out here that these FTS rankings differ from the actual official WFTDA rankings. The latter have Glasgow 267th and Brighton 268th, and a prediction based on those rankings would come up with something close to a draw!

“We’re preparing ourselves for big hitters and a solid team. We know it won’t be easy. They have a few A/B crossovers too, so it’ll be interesting to see how ours match up against theirs across both games.”
GO GO GOZER, BRIGHTON ROCKERS 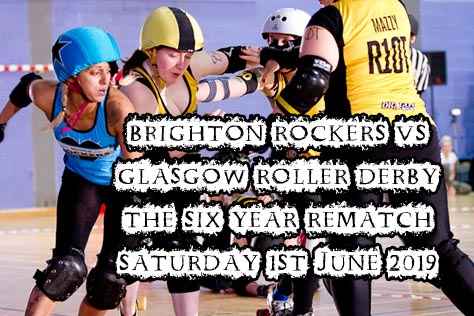 “Here in Glasgow we keep our canny eyes on the opposition to make sure we don’t underestimate them. We’ll be sure to look out for any loose pebbles from the beach which might stick in our skates.”
HADRIAN’S BRAWL, GLASGOW ROLLER DERBY

Tickets are available online at £8 adults (£7 students and Compass Card holders) and free for under 12s. See the link at the bottom of this piece. Tickets on the door are smidgeon more for adults. Doors are at 2pm on Saturday with the A-team game at 2.30 followed by the B-team match at 4.40. [SKIP THIS PARAGRAPH IF YOU DON’T LIKE PRE-GAME PREDICTIONS] This first meeting of the Brighton and Glasgow B-teams is also expected to be a close one. Flattrackstats rank Glasgow’s Maiden Grrders as 212th in Europe with Brighton’s Rockerbillies 235th. Glasgow B are given 53% chance of victory here with the predicted differential of 51:49 suggesting a super close 153-147 win for the Scots.

The venue is the Dolphin leisure centre in Haywards Heath. Sat Nav users should point their cars at RH16 1LY. Train folks will be excited to hear there’s no engineering works for once, so there should be five trains per hour from Brighton to Haywards. The venue is seven minutes walk west of the station (turn left and follow the signs) with an OK pub opposite the station and a big Sainsbury’s with ATMs halfway to the venue. The Dolphin itself has vending machines and a cafe in the lobby, plus a table selling booze in the hall. There will also be games, competitions, merch and more. The event is part of Brighton Fringe Festival so there will probably be a few surprises too, including maybe something made of paper from us at BRATS to pick up on your way in. See you there!

[Photos from 2013 game by Dave McAleavy]

The mighty Brighton Rockers are back in action in Haywards Heath this Saturday (May 5th) as part of the Fringe Festival. They will be facing the Paris league Lutèce Destroyeuses in both A and B-team games. This will be the Rockers’ first WFTDA sanctioned home game, having fairly recently become full members of the world governing body. With the teams incredibly closely matched in the rankings, this is one event not to miss! Doors are at 2pm at the Dolphin Leisure Centre, with the B-teams facing off at 2.30 followed by the A-game at 4.30ish. Adult tickets are £8 online from the link at the bottom of this piece or £9.50 on the door, with discounts for students and Compass Card holders, plus free entry for under 12s.

Car users should point their Sat Navs at RH16 1LY whilst the venue is seven minutes walk from Haywards Heath train station – turn left and follow the signs. The pub opposite the station, the Burrell Arms, is OK for a passing pint. It can get busy with people watching football on the TVs, but there’s a big beer garden out back. There’s a large Sainsbury’s (or Asdabury’s if it’s called that yet) halfway between the station and venue, which also has the closest ATMs to the venue. There’s a bar in the hall, along with various vendors and more. The after party will be back in Brighton at The Victory Inn. Don’t forget to pick up our free magazine Turn Left on the door for a full preview, an Officials Special, an interview with the departing Racey and more. Time to check out the predictions…

[***SPOILER ALERT – SKIP DOWN TO AFTER THE NEXT PHOTO IF YOU DON’T LIKE READING PREDICTIONS BEFORE GAMES***] We’re going to pretty much ignore the WFTDA rankings here. Whilst the Rockers A-team do have one on Flattrackstats, it’s unofficial as they need to play three WFTDA games to get an official ranking. The listed ranking is based on their sole WFTDA game to date (away to Barcelona) and any prediction based on a single result could be wildly swingy. If you twist our arm, we’ll tell you that the Rockers place 238th and Lutèce 255th in WFTDA, and the predictor gives Brighton’s A-team 69% chance of victory and something like a 160-130 home win (16:13 differential).

The European rankings are based on loads of games and thus probably far more reliable. Here it’s Lutèce A who have the advantage, placing 51st on 614.7 points, whilst the Rockers are 64th (604.0). The visiting A-team are given 52% chance of victory, with an expected differential of 32:31 equating to a super close 160-155 Lutèce win. It’s the same story in the B-team game. Les P’tites Frappes place 250th (470.9 pts) with the Rockerbillies 282nd (461.1). Again the visitors have 52% chance of victory, and the differential here is even closer, with 44:43 equating to something like a 176-172 away win. Looks like we’re in for a couple of nailbiters if these predictions are close to accurate! 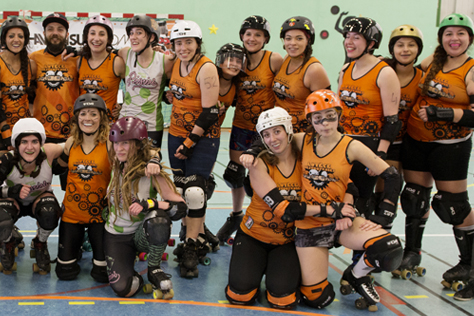 “I don’t really know much about Lutèce at all, but I have heard their level is very similar to ours, so I expect that we’ll all have to work really hard. I’m a bit superstitious and I believe that predicting results gives bad luck, so I think I’ll stick to saying that both the A and B-teams will smash it!”
COLD CRUSH, BRIGHTON ROCKERS

“We know the Brighton A-team are above us on the WFTDA ranking at Flattrackstats, and that they recently beat the Barcelona team we narrowly lost to in November. We think that both games will be tough. We’ve never met the Brighton league before and we’re looking forward to it.”
CAPUTRA, LUTÈCE DESTROYEUSES 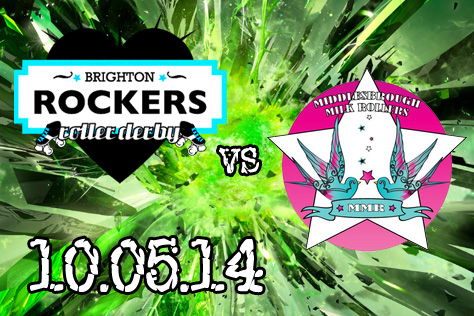 The Brighton Rockers complete a series of three home games in fairly quick succession when they face off against Middlesbrough Milk Rollers on Saturday 10th May. The match starts at 3pm at Brighton’s usual home venue, Haywards Heath’s Dolphin leisure centre. The venue is five minutes walk from the train station, and features seating, vendor stalls and two bars. Tickets for the game, which is part of Brighton Fringe (the world’s third largest fringe festival), are on sale online at £8 each or £24 for four (£6 each). Tickets for under 12s are free. See the link at the bottom of this piece.
To say this a big game – the word ’bout’ was recently dropped by world governing body WFTDA, incidentally – would be something of an understatement. The Middlesbrough team currently rank fourth in the UK, and with the teams above them hailing from North and West of the border, they’re the highest placed English league (in the absence of all-conquering London Rollergirls, who are too USA-focused to qualify for the UKRDA rankings).
Two of the Milk Rollers were amongst the most recent Team England fourteen, which took part in a tournament in France and saw England defeat not just the host nation, but also number two in the world Canada. Terri Sudron and Ella Storey represented the national side, and their international exploits highlights the current strength of the Teesside league. Middlesbrough famously took a whole year off playing games in 2011 to focus entirely on training, and the plan seems to have done the job, with MMR having charged up the rankings since they resumed competitive play.

On paper this is the biggest challenge the Rockers will have faced at home, and it will take an awesome performance if the Sussex side are to maintain their historic unbeaten home open door record. Having said that, Brighton have beaten the second, third and fourth ranked English UKRDA sides at Haywards Heath in recent months, so taking on the top ranked league next seems a natural decision.
The official UKRDA table at flattrackstats.com places Middlesbrough fourth on 676.5 points, with the Rockers tenth on 644.5. The site’s online predictor gives the North East team a 69% chance of taking the win. Brighton have been remarkable consistent in terms of points scored at the Dolphin recently, coming within a couple of points of 175 in all of their last four home games. The Milk Rollers, meanwhile, tend to average a little over 200 away from home. This would seem to tie in with flattrackstats’ predicted 17-21 score differential (the equivalent of a 170-210 away win). As ever, though, if it was really possible to accurately predict sporting results, bookmakers would be homeless, so let’s see how it plays out on the day.
Be sure to snap up your tickets in advance. Not only is it the only way to grab the ‘four for the price of three’ deal, but with Brighton Festival and Fringe (which the game is part of, remember) starting on May 3rd, the next week could see a rush on tickets from visiting culture vultures, so don’t miss out. Also don’t forget to pick up your free copy of our Turn Left fanzine on the door; this issue is a festival special and includes specially commissioned derby art and poetry. We’ll leave you with a few words from a member of each team, plus a skater who has faced both sides in recent months…

“I’m so excited to be playing in this game. Middlesbrough are such an awesome team! I’ve encountered a few of their players at mixed scrims and Team England tryouts. They’ve got a bit of everything in the skaters I’ve seen, but I don’t know much about their style. I’ll have to wait and see, but that’s part of the fun!”
SHAMBOLIC, BRIGHTON ROCKERS

“We always keep an eye on our opponents. We’ve heard a lot of good stuff about the Brighton Rockers, and we’re expecting a close and challenging game. Obviously we’ll be watching out for Bash, although I’m sure she’ll make her presence known early on!”
LITTLE GRR-MAID, MIDDLESBROUGH MILK ROLLERS

“MMR and Brighton should prove to be a pretty close battle – they are both very physical teams, with strong blockers and fast agile jammers. MMR may seem to have an obvious advantage with Team England squad skaters Terri Sudron and Ella Storey in their crew, but there’s no denying the skill and strength of Brighton’s skaters – notably The Mighty Mighty Bash, Shambolic and Chariot Sophia.”
LIVID DOLL, LEEDS ROLLER DOLLS